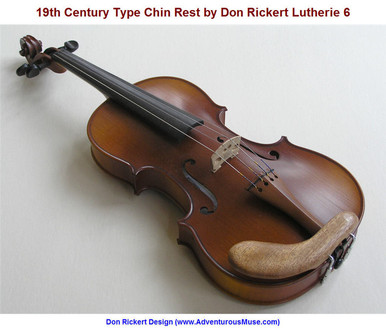 We at Don Rickert Lutherie have finalized our design of the "skinny chin rests" that were used by some players in the 19th Century, notably Pablo de Sarasate. These minimalist chin rests are targeted to Old Time fiddlers and 19th Century-style fiddlers, who really only use a chin rest for holding their fiddle when going back to 1st position from 3rd position. This is by no means an modern ergonomically-correct chin rest, but we did the best we could to make it so.

These chin rests look a lot cooler and are definitely more period-authentic for re-enactors than a bulky  modern chin rest. They are the ideal chin rest for:

While the chin rest was not commonly used by violinists and probaby used almost never by fiddlers until well into the 20th Century, the chin rest was actually invented in 1820 by Louis Spohr (a.k.a. Ludwig Spohr...he changed his name from the German to the French version of the same name at some point in his life).

See the article New 19th Century-Type Violin Chin Rest by Don Rickert Lutherie for an image of Spohr's drawing of his chin rest. Spohr's 1820 chin rest somehow attached to the end pin of the violin.

The Other 19th Century Chin Rest

There is another type of chin rest that made it onto the scene later in the 19th Century that is often attributed to Spohr. Our research indicates that this attribution is probably incorrect...Spohr apparently had nothing to do with it. One notable user of this later 19th Century chin rest was the Spanish virtuoso, Pablo de Sarasate (1844 - 1908), whose playing years were from about 1860 until the early 20th Century.