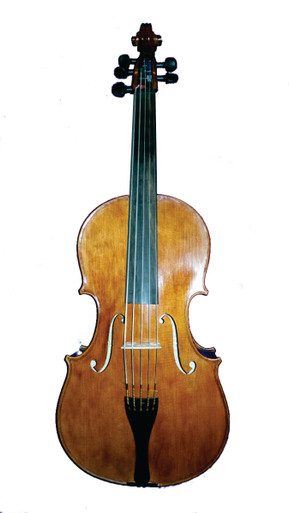 The Baritone (Octave) Viola da Spalla by Don Rickert is a smaller, contemporary (as opposed to Baroque), variation on our Violoncello da Spalla. Both instruments are tuned the same way, which is exactly like a full-size cello, but with an additional E string on the treble end. Yes, it has 5 strings.

The Baritone Viola da Spalla is held and played just like the larger Violoncello da Spalla, which is suspended by a small strap across the chest. You can clearly see the hold and playing technique in one of the photos. In fact, “da spalla” literally means in Italian, “of the shoulder”. The “shoulder” reference here refers to the shoulder strap that is used.

The Baritone Viola da Spalla is held with a strap around the shoulder and neck, as you can see in one of the photos.  In that photo, Don Rickert is playing a similar but larger instrument, a Tenor da spalla, a larger 4-string variation of our regular 5-string Violoncello da Spalla.The instrument is easily (a relative term) played by violinists and violists. Unlike the vertical bowing technique of a regular cello, the Baritone Viola da Spalla is bow from the treble side like a violin or viola.

While our Violoncello da Spalla is the instrument of choice for Baroque repertoire, the smaller Baritone Viola da Spalla is ideal for “basso continuo” (backing bass-baritone) in Celtic, Southern Mountain and Down East Old-time, as well as various other “alternative” musical genres. In fact, one of our customers regularly competes in the “non-traditional” category at Old-time fiddlers’ conventions.

The Baritone Viola da Spalla, from the front, looks pretty much like a 5-string 16.5" viola. A side view shows a very big difference. It has 3" ribs. This instrument, with its massive internal air space, growls with a baritone vengeance. Loud?...YES!

Because of its full-size viola length, one could be tempted to try to play the Baritone Viola da Spalla under the chin or da braccio (means literally "of the arm" in Italian). While this is possible if you have a long enough neck and left arm, the instrument is intended to be played, as its name implies, da spalla (means literally "of the shoulder"...specifically the right shoulder), as illustrated by at least one of the photos accompanying this listing.

According to known historical accounts, the instruments like the Baritone Viola da Spalla were invented in the late 1600s in order to minimize the learning curve of accomplished violinists and violists wanting to play in the baritone (i.e. cello) range. Learning to bow the Violoncello da Spalla does not take much time at all. The Baritone Viola da Spalla, as well as our 18” Violoncello da Spalla are both considerably more manageable than larger models that can have bodies as long as 21" (about the size of a 1/8 size cello). Many, if not most, experienced violinists and fiddlers, whose experience is playing the lead melody, will probably have to learn some more about the principles for improvising bass harmony and chords; basically, the whole notion of what is called basso continuo. We have already starting outlining an instructional book on this very topic. Who doesn’t need to know more about the principals of harmony? Even many orchestral musicians have shockingly scant knowledge of music theory.

Despite its diminutive size compared to a conventional 4/4 ‘cello, the Baritone Viola da Spalla has a sound that far surpasses that of a “chin cello”, including our own 5-string octave viola, with an amazing sonic power and deep timbre approaching that of a full size cello.

Strings: The Baritone Viola da Spalla is strung with a standard set of octave viola strings.

Case: Supplied with a free gig bag and separate bow case, as standard hard shell cases simply are not made for ‘cellos smaller than ¼ size. We can make a custom case if you are interested. Be aware that custom cases are not cheap.

Bow: We will help you to select either a full-size or fractional bow. Since this instrument is considered a "modern' violoncello da spalla, either a modern or baroque bow is acceptable; however, the bow must be a 'cello bow.