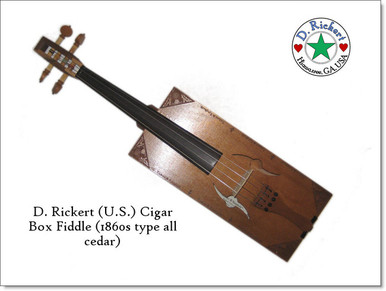 This is an authentic 1860s replica cigar box fiddle made to luthier standards (correct neck angle, bridge height, etc.) with reinforced corner joints and an internal dowel stick (similar to a banjo). It is designed to be played by actual fiddlers rather serve as an interesting wall decoration!

This instrument is perfect for American Civil War Re-enactors, Skimishers and Authentic Campaigners, as it is close to the actual instruments crafted and played by both Confederate and Union soldiers (an Irish infantryman in a Yankee regiment gets the credit for making the first one). It has dimensions similar to a regular fiddle and fits into a modern violin case if desired. We can make you a custom wooden "coffin case" or you may want to build such as case yourself.

The instrument comes in a felt bag...for an additional fee, we can make you an authentic oil-cloth (linen saturated with purified linseed oil and then sun-dried) outer bag. The inner felt bag with an oil-cloth outer bag for weather protect would be the most authentic "on-the-march" case.

Our antique reproduction cigar box fiddles are extremely loud and powerful. They are made from solid Spanish Cedar, with a Western Red Cedar top. Unless the de-farbed version is ordered, this instrument is set up for authentic re-enactment with a few 20th Century conveniences such as modern steel strings and fine tuners on the tailpiece. The standard strings are D'Addario Zyex, which is a synthetic gut string with really nice sonority. The fiddle has traditional ebony or boxwood tuning pegs.

For the Authentic Campaigner, we offer a 100-percent de-farbed version, which has an 1860s type tailpiece with a genuine gut tailgut. While tied Baroque style tailpieces might have been found on some old (in the 1860s) fiddles, a modern (in the 1860s) tailpiece was the most common. It is different from a 20th Century tailpiece in two significant ways:

As far as we know, we are the only current makers of 19th Century tailpieces,

The defarbed version is strung with genuine 1860s-authentic pure gut strings (silver wound G, introduced in 1790 and most common G string in the 1860s). Unless otherwise specified, we use Gamut pure gut strings...far superior to the common and cheap Pirastro Chordas and a better value than some other "boutique" strings. For gut strings, the Gamut strings are amazingly stable once they are broken in.

The 1860s-Style Cigar Box Fiddle should also be played with at least an intermediate-quality wooden bow. The George Werner bows that we sell are a perfect choice. A step up would be the Marco Raposo bow.

New video of Troy Parker playing the classic old-time tune Mississippi Sawyer on the Reenactor, a reproduction of a mid-19th Century cigar box fiddle, design based on available historic records, by Don Rickert Design. Michael Fox on Dulcijo. Both Available at AdventurousMuseStore.com.

Do you wish to discuss a custom made period case?:
Yes