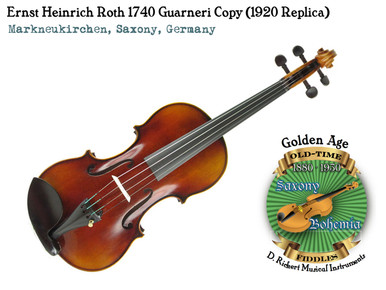 This is an expertly executed copy of a violin by Bartolomeo Giuseppe Antonio Guarneri, del Gesù, better known by his adopted name of Joseph del Gesu Guarnerius (21 August 1698 – 17 October 1744)

This replica illustrates how copies can often be nicer than an original. The varnish on this instrument is far too beautiful to be by the hand of Joseph Guarnerius, who was known for his sub-standard varnishing, especially in the later years.

The tone is just exceptional: powerful, rich, and clear. There is a degree of darkness in the timbre, as is characteristic all well-made Guarneris, but not as dark as some. Hey, at least a somewhat dark sound is why you get a Guarnerius copy in the first place!