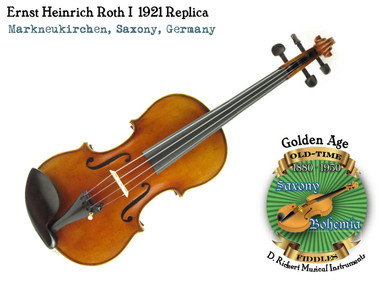 Our supplier of these fine instruments is a serious researcher and leading authority on the famous early 20th Century German violin maker, Ernst Heinrich Roth I, with a focus on Roth’s construction and legendary varnishing techniques and how these factors resulted in violins with extraordinary bass overtones.

His replicas can generally be described as producing a balanced deep tone and uncommonly fast response…just like the original Roth violins from the 1921-1933 period. ??Our Ernst Heinrich Roth I 1921-1933 period instruments are available either with a non-antiqued varnish (the look of a new instrument in the 1920s) or a perspiration-bleached finish (replicating how many of the Roths look today).

??If you look, you will find less expensive violins described as "Ernst Heinrich Roth style" and other similar descriptors. These are not the same as the instruments we sell, for which all peg fitting, bridge carving and fitting, sound post fitting, as well as all of the other set up details for the specific chosen string options (including nut grooving) is done in the workshop of D. Rickert Musical Instruments in the North Georgia Mountains (Hiawassee, Georgia, U.S.A.).