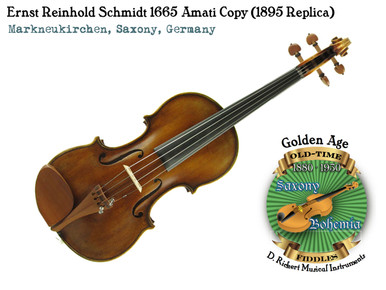 Made by a single luthier from start to finish, characteristic powerful (loud), warm tone, abeit rather dark.

I owned an original E. Reinhold Schmidt Amati copy almost identical to this one. I really loved the way that I could play with the timbre by the strings I used. If I wanted really dark, I would use the only synthetic core strings on the market then (early 1970s)(Dr. Thomastik Dominants). If I wanted a complex tone with some brightness I would use good old Red Label strings. Because the fiddle was so loud, it was a great instrument for a lead fiddler.