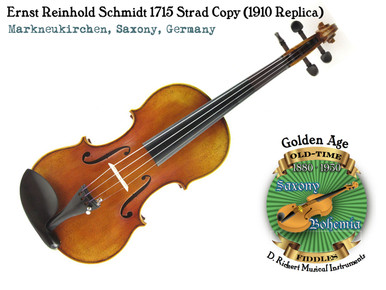 Big and powerful sound (full-range rather than overly dark and certainly not too bright) of the sort that could only be achieved by a master such as Schmidt, one of the greatest of the Markneukirchen makers, who continued to make great violins until the early 1930s when the Nazis took over Germany, including the Free State of Saxony, the state in which Markneukirchen is located. Schimidt was famous for his beautiful varnish. This violin replicates his technique perfectly. I can attest to this, as I have owed several E. Reinhold Schmidts.