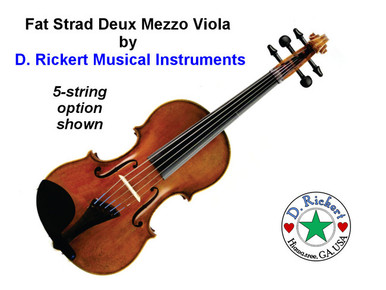 Comes with a case; however you must acquire a suitable bow. A quality viola bow works; however we recommend either the Rickert Specialized Series Light 5-String Violin Bow or the Heavy 5-String violin bow. The Light bow weights about 58 gr and has rather aggressive special synthetic hair (Zaralon, invented by the famous Dr. Peter Zaret). The Heavy bow weighs about 68 gr with somewhat less aggressive Zarolon "hair". The Light bow is designed for fast response (yet ability to make the C string sing) needed by lead fiddlers. The Heavy bow is designed for accompanying (aka "second") fiddlers who make extensive use of of double string harmony playing (i.e. drones, double-stops/chords).

The Fat Strad body has proven to be one of the most versatile “platforms” we have ever seen. We originally conceived the Fat Strad as a 5-string octave viola, which some people call “chin cellos.” While it worked pretty well, we felt that the instrument was just a bit small for the low cello C string.

It has a lovely timbre in the octave-strung configuration and has the projection power needed for an octave violin. It is almost as powerful (loud) as our considerably larger Attuned Special Series Tenor (Octave) violin, as well as our tried and true W.S. Mount and Darci Jones Model Octave Violins; used by a number of famous musicians (e.g. The W.S. Mount Octave Violin is “in the mix” of Alasdair Fraser and Natalie Haas’s new CD, “Abundance.”)

Note: This is not an outfit. Ships in a very basic case. You must supply your own bow or purchase a new one from us.?

The Fat Strad Deux is so acoustically powerful, it can even handle octave strings, including a low C "chin cello" string.

The Fat Strad Deux 5-String Mezzo Viola, available with 4 or 5 strings, by Don Rickert Musical Instruments is a hybrid between a violin and small viola; hence the “Mezzo Viola” in its name. “Mezzo Viola” translates to half way between a violin and a viola. It has a 14” long body and a 13” playable scale...same as a violin, fiddle or small viola. Unlike its predecessor, The Fat Strad 5, which was only available in a 5-string configuration, the Fat Strad Deux is available is either a 4-string or a 5-string. With the 4-string configuration, either a 26mm (normal) or 29mm (wide) nut is available. The 5-string is available with a 29mm nut.

The default tuning pegs for this instrument are a specially graduated set of Wittner FineTune internally geared planetary pegs. The Pegs go from large viola size (for the lower strings) to standard violin size for the higher strings.

The default varnish for the Fat Strad Deux is a traditional dark amber-medium brown oil varnish with an artfully done antique treatment.

For an additional fee, we can apply an old-style hand rubbed Italian varnish. The most commonly requested custom varnish treatements are non-antiqued…

An important piece of information on custom varnishing: In addition to the added cost, time to completion of the instrument is 5 to 6 weeks longer (so think twice).

More on the Structural Design of the Fat Strad Deux

The Fat Strad Deux is both slightly wider in the middle and lower bouts and “thicker” (36mm vs. 29mm ribs) than a regular violin or small viola. It is also more extremely arched and has new bass bar design (closer to a viola than a violin), which dramatically enhances the responsiveness of lower-pitched strings. The 5-string model has wider-spaced strings than the typical 5-string violin...an ergonomic triumph! Anyone who has ever played a 5-string violin knows that the strings are too close together, resulting in many players with normal sized hands to end rejecting 5-string fiddles. The Fat Strad Deux has a 5.5mm string spacing, which is plenty wide!

With its slightly wider girth (8.25” lower bout rather than the standard 8”), higher arching and wider ribs (sides), the Fat Strad Deux has approximately 27+ more cubic inches of internal air space than a standard violin or small viola. The greater air volume, combined with a new bass bar design (a hybrid, but more viola than violin), is the instrument that serious players have been seeking in a 5-string instrument.

Some of the characteristics that professional and advancedd fiddlers seek:

The Fat Strad Deux in 5-string configuration is simply the best 5-string violin you will find anywhere!

Mezzo Viola means between a violin and a viola; a hybrid of the two. David, a violist and cellist (who also plays violin) plays a familiar Irish jig and an old hymn. The Fat Strad Deux is a new instrument by D. Rickert Musical Instruments (www.RickertMusicalInstruments.com). The instrument is also available as a 4-string Octave Violin (aka Baritone Fiddle), called the Fat Strad 8vb Octave Violin Recorded with an iPod Touch (our video camera broke) at the 2014 Hoppin' John Old-Time & Bluegrass Fiddlers' Convention in Silk Hope, NC, USA