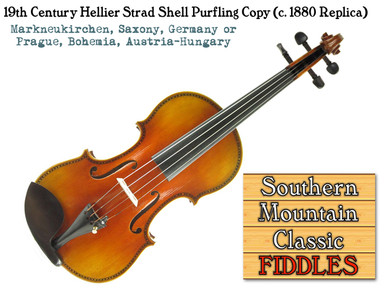 Shell or mother of pearl (MOP) inlay in lieu of regular purfling has its roots in the late 1600s with a particular custom instrument made by Antonio Stradivari known as the “Hellier Strad”. Strad copies in general have always been quite popular among Southern Mountain fiddlers. In the earlier days, Strad copies with shell inlay purfling were extremely popular. The decoration form is enjoying a revival.

The actual Hellier Strad was also decorated with ink work decoration on the ribs. This type of decoration has not been as prevalent as the shell purfling among Southern Mountain fiddles.

While many of the early Southern Mountain fiddles were locally made, the better ones were made in either Markneukirchen (Saxony, Germany) or nearby Prague (Bohemia, Austria-Hungary). The Hellier Strad Copy by D. Rickert Musical Instruments replicates the Saxony/Bohemian type.

The setup and varnishing is done by D. Rickert Musical Instruments in our WildRock Studios, Hiawassee, Georgia…located in North Georgia Mountains on the North Carolina the birthplace of Old-Time fiddling

The sound is full-bodied and powerful. The default setup is contemporary, with modern strings (choose strings at checkout) and fine tuners on the tailpiece.  We can easily set up the fiddle to earlier periods.