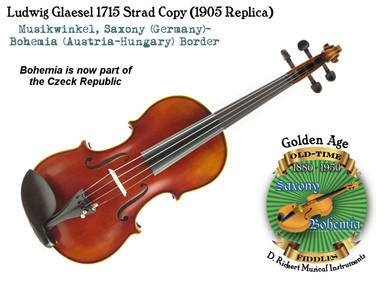 This instrument is made by Dan Sun of the Opera Workshop. Prior to working at Opera, Dan worked for a world famous German violin company dating back to the early 1800s.

Anyway this, instrument has the distinct look, sound and and varnishing style of an instrument by Ludwig Glaesel’s own masterful hands. The sound is distinctively Stradivarius with a nice full-range balance…neither particularly dark nor too bright. The sound is not as nasal nor sharp as many genuine Stradivaris or well made Strad copies. The player has more leeway than usual in created the desired tone and timbre by choice of strings. In other words, this is a very versatile fiddle!