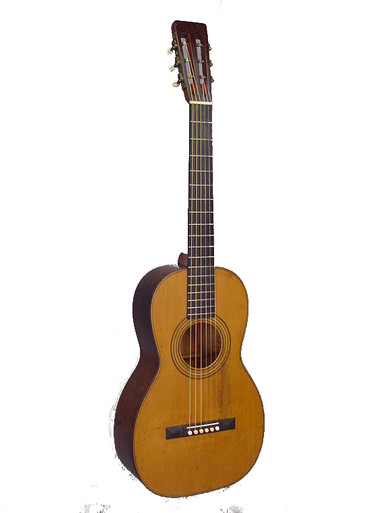 Our inexpensive Replica of the Martin 1840s “Spanish Guitar” Type is based on a modern small-bodied “parlor” guitar and comes close to replicating the look of guitars of an actual Martin 1842-43 “Spanish Guitar” with violin type tuning pegs. It is not, however, a true replica. For instance, it, having a truss rod and modern “X” bracing, can handle steel strings.

Note: Payment terms are possible. See the end of this product listing.

This replica meticulously adheres to smallest details, down to the last brace, of an actual Martin of the 1840s taken from historic records documenting the construction.

The photo shown is an actual 1840s Martin guitar (with slotted head), which we replicate perfectly.

Who is this instrument for?

The guitar is only suitable for the most discerning musicians seeking a meticulous replica of an early 1840s Martin.

The bracing is such that the most suitable strings are real gut. An acceptable alternative string would be with low tension Nylgut strings specially made for 19th Century guitars. Playing in any manner besides finger style is out of the question.

These guitars are from an era long before the introduction of nitrocellulose lacquer as a guitar varnish.

Rather than being varnished with the popular finish for musical instruments of the period, asphaltum, due to its high toxicity, we use violin quality linseed oil varnish over shellac, which is far more durable than “French polishing” (used at various points in Martin’s history), which deposits hundreds of micro-coats of shellac with a distinctive semi-gloss sheen. The problem is that French polish is extremely non-resistant to alcohol and other solvents, even those that might be found in guitar cleaner-polish. Rubbing drinkable grain alcohol onto a French-polished surface will literally melt a French polished finish.

A simplified version of our varnish method was actually used for a few years in the 20th Century as an alternative to the difficult to apply nitrocellulose lacquer (invented in the 1920s).

The materials used in the construction of this guitar are different depending on whether it will be shipped to the continental U.S. or anywhere else. There are international legal restrictions on the export of Honduras Mahogany and most forms of ebony from the U.S.

In order to comply with international regulations, we substitute Sepele Mahogany for Honduras Mahogany. Sepele is actually a much more beautiful wood than Honduras and possesses similar acoustic characteristics.

The other substitution is Katalox for Ebony. Katalox is harder than ebony. It is very dark brown and eventually oxidizes to black.

The Materials for Non-U.S. orders

Due to the expense of this instrument and the long wait time (up to 120 days), the following payment terms are available:

Please call or email us if you wish to discuss this option.