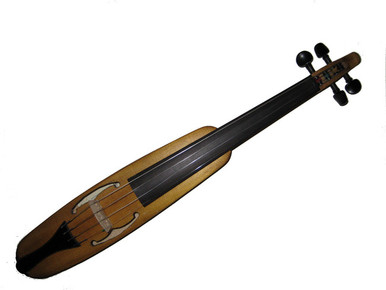 Our extremely popular Neil Gow Pochette has been chosen to be part of Pochette and Kit (another name for a pochette) exhibit at Ringve - the Norwegian National Museum of Musical Instrument. Read about it at AdventurousMuse.com.

The Neil Gow Pochette is the best-selling instrument we have ever produced. There are proud Neil Gow Pochette owners in the Continetal U.S., Hawaii, Canada, Denmark, Scotland, England, Indonesia, Australia, New Zealand and Japan.

WANT TO PLAY A FIDDLE LIKE THE ONE THAT NEIL GOW PLAYED (one of the founding fathers of Scottish fiddling) played. THOMAS JEFFERSON often played a fiddle of this type as well (yup, the President was a fiddler as well).

You need look no further. We now make in our Hiawassee, GA lutherie a pochette based on the one in the Burrell Museum in Glasgow, Scotland...; which has become one of our most popular instruments. Period (18th Century) wooden and genuine leather cases (like the one Thomas Jefferson used) are available for this instrument, which, in addition to being charming and beautiful, sounds wonderful. Listen to the sound sample below:

This Neil Gow Pochette is set up for and is strung with genuine 1780s-type gut strings (the g-string is wound with silvered copper). It has a fossil ivory nut.

Case for this Pochette

We no longer offer free cases for our pochettes and travel violins. If you are interested in absolute historic authenticity, the following cases are available:

A less expensive case, such as one of the several we sell for our travel / backpacker violins can be used as well.