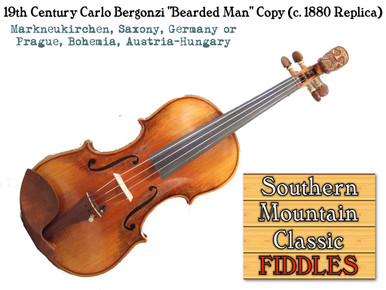 Probably the best-known fiddle with a “Bearded Man” finial (i.e. scroll) of this type is the customized antique fiddle played by Vassar Clements, one of the fiddlers who played with Bill Monroe’s Bluegrass Boys (the group that defined Bluegrass as a genre with its first album for Decca Records in 1949). Some sources speculate Vassar Clement’s instrument was built by the Gaspar Duiffoprugcar in mid to late 1500s. Most agree that Clements’ fiddle was at least 300 year old, regardless of the maker.

The name often associated with “Bearded Man” violins is Carlo Bergonzi (21 December 1683 – 9 February 1747), an Italian luthier who apprenticed with Hieronymus Amati, collaborated with Joseph Guarneri, and is considered the greatest pupil of Antonio Stradivari.Bergonzi apprenticed under Stradivari and eventually was made head of Stradivari’s repair business. Since Bergonzi’s repair services were in high demand, he was unable to devote the time to producing many of his own instruments. Bergonzi violin designs were based on the Stradivari and Guarneri templates, but often featured elaborate bas relief carved backs and, of course, Bearded Man finials.

While many of the early Southern Mountain fiddles with Bearded Man finials were locally made, the better ones were made in either Markneukirchen (Saxony, Germany) or nearby Prague (Bohemia, Austria-Hungary). The Carlo Bergonzi “Bearded Man” Copy by D. Rickert Musical Instruments replicates the Saxony/Bohemian type.

The setup and varnishing is done by D. Rickert Musical Instruments in our WildRock Studios, Hiawassee, Georgia…located in North Georgia Mountains on the border of North Carolina, the birthplace of Old-Time fiddling.

The sound is quite Strad-like, full-bodied, focused, balanced with good projection volume. The default setup is contemporary, with modern strings (choose strings at checkout) and fine tuners on the tailpiece.  We can easily set up the fiddle to earlier periods.