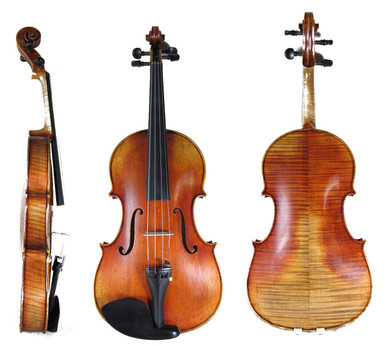 This is the T-Rex Octave Viola built to the 15.5" option. We made it for a show. It is ready to ship (actually, within a day or so) rather than the current wait time of 6 weeks or more. Many will find this very slightly smaller instrument a lot easier to handle. It has a playable string length of 14"; the same as most mandolins. It has almost the same incredible sonic power of the standard 16" body. The difference in sonority is negligable. This is still a physically huge instrument based on the Tertis wide-body violla pattern.

We only have one and it is made to show standards, so it is extra nice in every way! Comes with a free suspension case.

Since the beginning of our adventure as an independent boutique custom lutherie (2007 officially), we have always allocated much attention to designing and making the best possible acoustic octave (aka baritone) violins and fiddles. More recently (about 4 years ago), we added acoustic octave violas (aka chin cellos) to our product offerings. Even though we have developed a number of electronic octave instruments for customers and musical instrument design competitions, we have never sold these online. That is about to change; however, that is a topic for another place.

The T-Rex Octave Viola and other amazing low-pitched acoustic bowed instruments are available at the Don Rickert Musician Shop.

The T-Rex is based on a 16” Tertis wide body pattern viola (note: viola sizes are designated by their body length, expressed in inches). There are many guides on the Internet for measuring your reach to determine whether or not you can handle a 16" viola.

See also the table below:

About Tertis Wide Body Violas Such as the T-Rex

Lionel Tertis is regarded by many as the greatest viola player of the 20th century. Tertis preferred a large viola in order to get an especially rich tone from his instrument. Tertis created a viola pattern that would provide the tonal advantages as a large 17 inch plus viola from a 16” viola, which is today regarded as a full size viola. Tertis violas are wider than violas of the same body lenths. On average, a Tertis a has:

Large But Quite Playable

As big as it looks next to a regular violin (see image that accompanies this listing), it has a 16” body. Because it is based on a Tertis viola pattern, it is really wide, making it look like a much larger instrument. The span of the lower bout is more than 10 inches. That is really wide! Nevertheless, the instrument is surprising easy to manage and hold (yes, with an extra large shoulder rest), as the rib height is a manageable 38mm; about the same as a regular 16” viola.

Some More Details About This Instrument

Tuning Pegs (Graduated Sizing: the right size for each string)