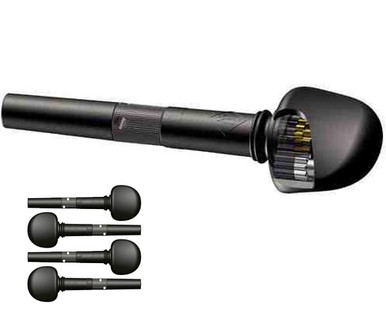 Wittner Fine-Tune pegs look like plain ebony pegs. Currently, ebony is the only currently manufactured option. As Henry Ford was to have said about the Model T, "You can have any color you want, as long as it is black."

Wittner internally-geared "Finetune Violin Pegs" allow you to tune your instrument quickly and accurately withou the use of fine tuners on the tailpiece. These pegs are gentle on the pegbox, as they are held in by friction like a regular peg instead of screwing and gluing...in other words, you DO NOT damage the pegbox; a very important consideration if you have a valuable instrument. The pegs are durable and stripped gears is a rare occurance.

Made in Germany by Wittner, the Finetune Violin Peg provides very easy, quick, effortless and very precise tuning. Made of high tech composite material and light alloy, the tapered peg is put in place without glue by simply pressing it into the pegbox just like any ordinary peg.  Self-inhibiting transmission inside the peg; the string can not lose tension. Users of other brands know that the pegs often slip a semitone or two after tuning.  Because, once installed, you only turn the button rather than pulling and pushing the peg out and into the pegbox, there is no wear on peg and peghole ( the shaft of the peg does not spin, subsequently there is no friction).  Climate and humidity has no influence on the peg.  4/4 size only.

Unless we install the Finetune Violin Pegs for you, you will need a peghole reamer for a proper fit. This is not an issue if you order the pegs at the same time you order one of our instruments.

Wittner Fine-Tune pegs are a modern invention. For owners of fiddles set up to ealier times, period authenticiy becomes an issue. For example, fiddles of the early 20th Century did not have fine tuners on the tailpiece. By the 1920s, a variety of string types were in use, including early metal core strings, as well as silver-wound silk ("silk and silver") and pure gut, often with a steel e-string. Especailly with the higher tension metal core strings, tuning was a real pain. If one is not troubled by some ideal of pure authenticity, the Wittner FineTune pegs make sense for an early 20th Century setup. You will definitely have a more period-authentic looking instrument with no fine tuners on the taiilpiece. You will also spend more time playing than tuning.

If one is trying to replicate a mid-19th Century fiddle setup, the authenticity issue becomes more complex. Taking a look at actual practice of Civil War re-enactor fiddlers, there are three (at least) camps, as it were:

Some closing perspective on the matter

Even Baroque period (18th Century) muscians, especially lute players, but occassionally violinists, often use internally geared tuning pegs in the interest of spending more time playing than tuning. I have several instruments that are strung with gut and set up in the 19th Century manner. I use Wittner pegs on one of these instruments when performing for an audience.